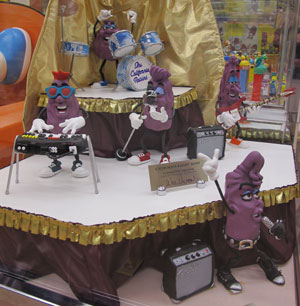 Barker Character, Comic & Cartoon Museum has one of the finest California Raisins collections in the world. The award winning commercial campaign, created in 1986 for the California Raisin Advisory Board, featured four raisins singing “I Heard It Through the Grapevine“. The commercial was an instant hit, resulting in a torrent of collectible merchandise, most of which is on display in the Museum.

The commercials were produced by Vinton Studios using the stop motion technique known as claymation. As their popularity grew, the commercials featured the voices of Ray Charles and Michael Jackson. The Museum’s collection features actual claymation models of Michael Jackson and the four raisin musicians, who were eventually given the names A.C. (vocals), Beebop (drums), Stretch (bass), and Red (guitar/piano).  The Hardees restaurant chain produced the most collected California Raisins merchandise, in the form of small, non-poseable California Raisins figures. 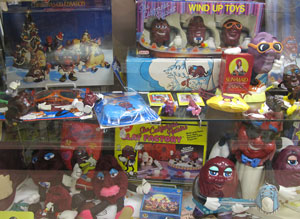